Having been told by I-kid-you-not dozens of people, I'm now selling some of my photos as prints and posters on the site RedBubble.

The Devil's Tree... got a haircut

Perhaps a better description would be 'amputation'. Two of the larger branches on the tree that supposedly were used to hang people from, have as of May this year been hacked off.

The tree as a whole is still there, so is Heat Rock. The DPW can hack off the limbs, but you cannot destroy the memory and the legends of the place.

An older photo courtesy of LostInJersey.com showing the tree with all the limbs intact.
The following shots show it as of this afternoon. 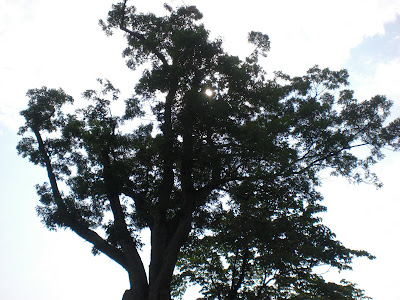 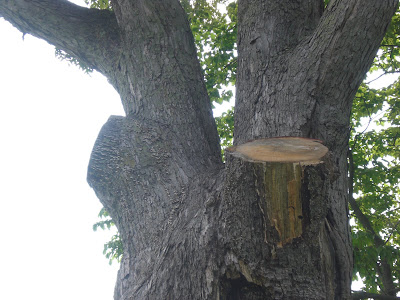 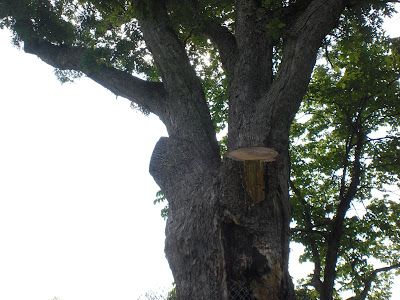 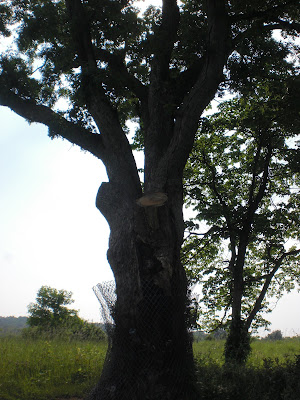 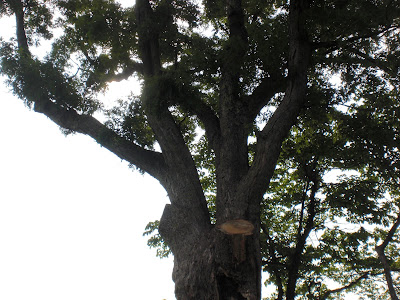 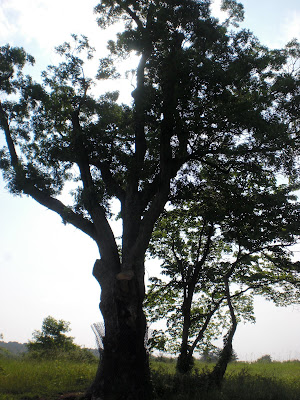 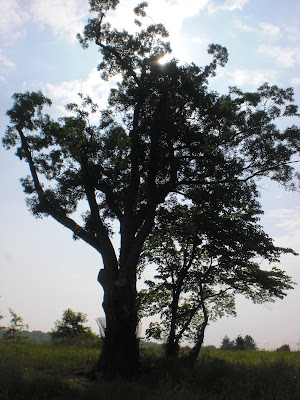 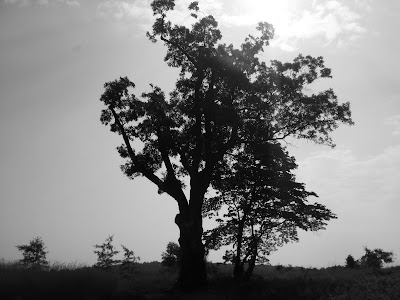 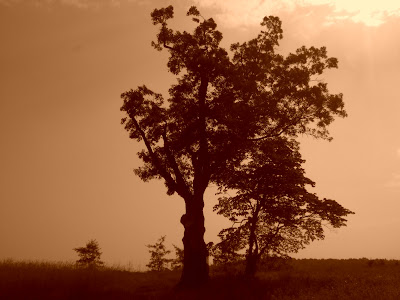 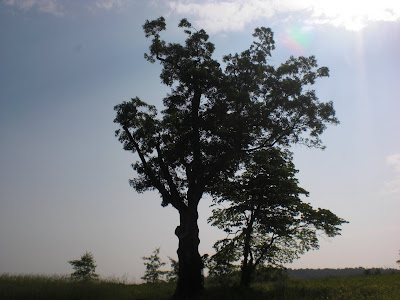 Do I believe in the legends associated with the tree? That it's haunted, cursed, a Gateway to Hell? The execution place for unruly slaves? A KKK hideaway? The Devil driving a Black Bronco chasing people away?

Eh, I believe that every legend is based -at least partially- in fact. Slavery was legally abolished in NJ in 1848. However, by the start of the Civil War, NJ citizens still owned 18 "apprentices for life" as they appeared on the NJ census, however, the Federal one listed them as slaves.
http://www.slavenorth.com/newjersey.htm.

Now, that tree does NOT look to be over 160 years old, but I could be wrong. It happens every now and then.

Also, perhaps it was specifically slaves that were hung there? What if it was just ordinary and free African Americans? Or what if a previous tree had stood on that spot back during NJ's slave-holding times that was used to string up unfortunate men, and the legend held through the ages?

Heat Rock is indeed still there, but the statement that "snow never falls on Heat Rock" is a misconception. During some parts of the year, snow does indeed fall on Heat Rock, but then melts into water. The rock is larger and retains heat better than the surrounding top soil, which allows snow to accumulate on it. The concept is call Geothermal heating and conduction of heat. It's physics and engineering that explains that myth, not The Devil.

The legend that Satan drives a black truck and chases you away can also be explained as some guy with a Bronco, Blazer, or Durango that likes to play pranks on people. I had it happen to me one night with a bunch of people in the car and the "phantom truck" happened to be a black Cadillac Escalade.

But, there is that very ominous feeling that you're being watched when you walk there. Like you're treading on hallowed ground, the same feeling when you walk into a cemetery. I do feel that based on my own experiences there (detailed here: http://akthejefe.blogspot.com/2008/09/devils-tree.html ) and that of others who I know better than to make stuff up to impress me... yes, there is something paranormal about this place. And it is my hope that the local DPW doesnt further damage this piece of Jersey legend and lore. 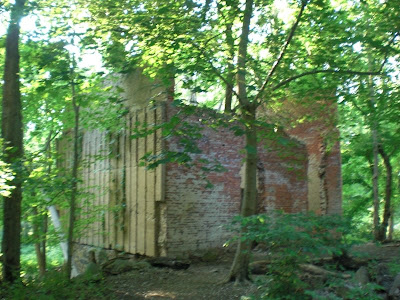 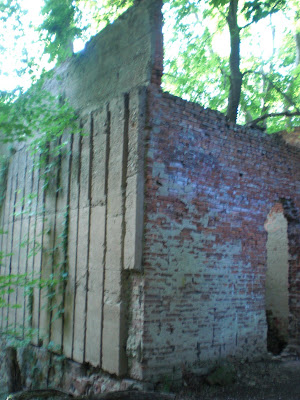 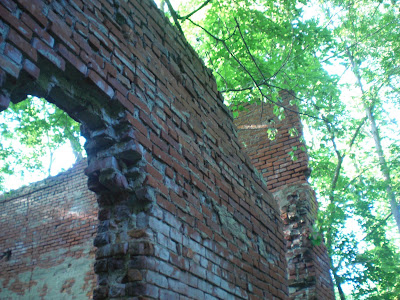 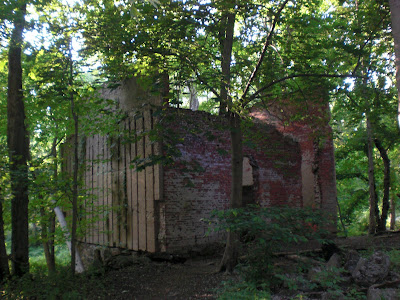 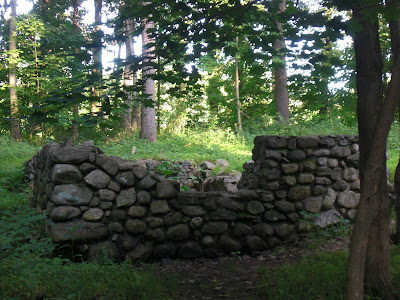 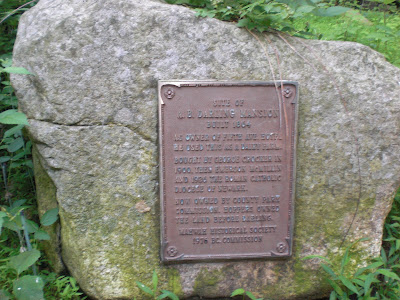 Sweetie and Me found this burned-out building in the Ramapo Reservation woods while on a fishing trip this weekend, and about a hundred feet away, the remains of a mansion built in 1864, according to the plaque on the rock.

Sort of an accidental find, we snapped a few shots then went on to catch absolutely nothing in the nearby river. Either way, we had a great time and let us know what ya think of the shots.

Venturing again up into the Blauvelt woods again, I explored more parts of the old and abandoned Camp Bluefields training site.

This was the first time in a while that I've gone somewhere by myself, and since I was alone and having a really sub-standard flashlight, I decided NOT to venture into the tunnels that criss-cross these woods. After a while, all these walls and bunkers all start to look the same, and if you venture too far away from them, it's like they're not even there. You need an iron grip on your mind and senses if you plan on going here. You need to know what sounds are threatening and what are just deer.

This was also the first trip I've been on where I've seen... snakes. Yes, snakes. I was walking along one of those seven-foot tall walls and heard something skitter through the brush by my left foot and sure enough, there was a black snake about the length of my larm and thickness of a garden hose. He didnt bother me, and I didnt bother him.

I brought my metal detector with me, but didnt use it and it just ended up getting caught on low-hanging branches since it jutts like a foot out of my backpack. I felt a large piece of concrete over one of these tunnels move when I stepped on it, so yeah I took another route when I went back that way.

It's kinda funny, with the route I take to this place, how strenous a hike it is... all the graffitti there is. You figure that most bastards who spray-paint shit everywhere wouldnt waste their time walking 3 miles deep into the woods, right?

It's a great place to go if you have the lighting and the nerve to go there.

I took a whole mess of pics of the places I went to today, leme know whatcha think.