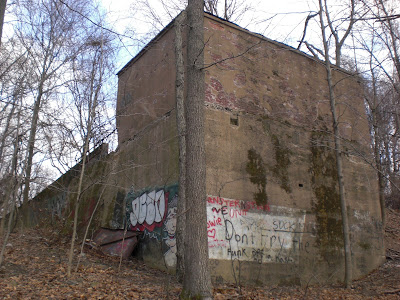 Most know it as 'Tweed', an abandoned and mysterious complex of concrete tunnels, bunkers, and walls built atop Clausland Mountain in Blauvelt, NY.
Many say it's haunted, frequently visited by Devil Worshippers, home of all manner of odd creatures, homeless, and graffiti artists.

I really feel like a moron writing this, but it took two or three tries to even get CLOSE to the Camp, and then another half-mile of climbing in the wrong direction to finally see it.

See, about a mile South lies the old Nike Missile Base of Piermont, NY. Now, I had figured hey, if the Army owned one thing up there, then the old WWI rifle range must be part of the same complex, right? Well assumptions are the mother of all screw-ups and I want to take this oppertunity to apologize to Nicky for repeatedly leading her on a series of wild-goose-chases through the woods.

Then, once I got a satellite picture of the place and map it out with a red pen, we drive up there, find a suitable parking spot, and proceed to walk up this windy road before I suggest that I take the short cut and run ahead to see if we're in the right direction.

Now I'm a quarter-mile up in the thickest woods I've ever seen, having scaled two 20' embankments that put my knees to the test, and my right one failed.

Pulling out my binoculars, I looked around and saw nothing akin to a large bunker and began to sheepishly stagger back towards Nicky when I look north and see part of the western-most part of the camp. Keep in mind, this camp was constructed around 1918 to train soldiers for WWI and specifically trench warfare. Its 91 years old, and trees are growing through it. The whole thing, according to my satellite photos, covers a few hundred square acres.

Before and after WWI, the place served as a Girl Scout Camp, and summer camp for young women. The NY Times even did an article on it, where for $3.50 a week women could go for some relaxation… especially from men. (http://query.nytimes.com/mem/archive-free/pdf?_r=1&res=9B06E1DF123DEF3ABC4052DFB066838D609EDE) It was then re-opened in 1942 to train soldiers to fight in WWII, however, since trench warfare wasn’t all that commonplace in that chapter of world history, it wasn’t all that useful.

So I go find Nicky and promise it wont be too far a trek through the woods.

Turns out you have to cross two ravines to get there, and since Princesses don't walk across fallen tree trunks five feet above freezing water... I went ahead by myself.

Making a long story short, I got to the 'tower' and took a bunch of pics of the inside and surrounding area. For being 91 years old, minus the graffiti, it's in pristine condition… structurally. The steps are still functional and the rails all around are in good shape.

After looking around there, I headed east along the ten foot wall and ducked down into two of the trench-training areas and snapped a bunch of photos. Along the wall was a series of 10" iron flanges that I assume used to hold slats of wood. Standing on one of those pieces of metal, I could just get my face over the wall. I assume that's where the soldiers were trained to shoot from, since trench warfare basically means ducking in these long trenches in the ground, poking your head and rifle up every now and then to try and squeeze a shot off at the enemy. ( http://en.wikipedia.org/wiki/Trench_warfare )

Learn your history. It's some nasty stuff.

Either way, I shot 24 pictures of the site, most aren't worth posting but the good ones I will as soon as I can get my bastard computer to work right.

We plan on coming back here more when the weather is warmer. 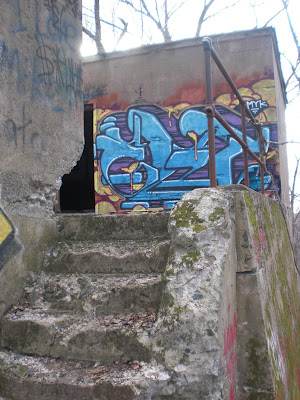 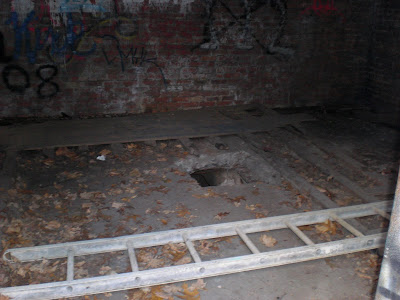 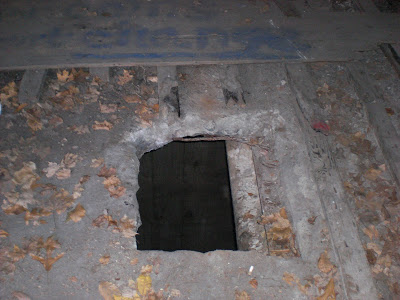 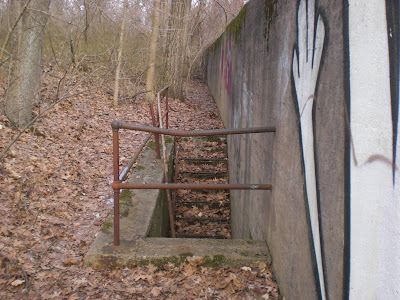 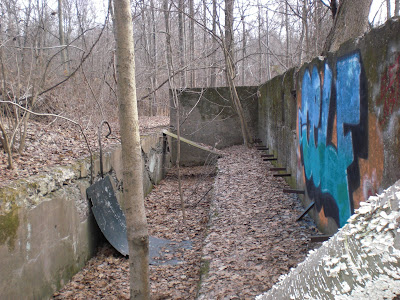 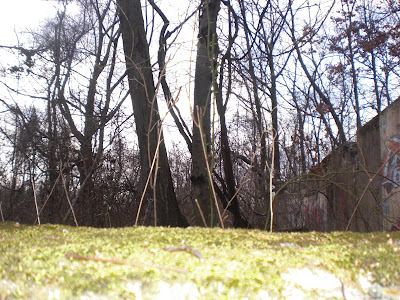 Alls Quiet on the Western Front

Set deep in a cornfield in Central Jersey is the legendary Cow, so coveted by frat brothers from Rutgers and nearly toppled by mother nature on countless occasions. Overall, the trip realistically wasn't worth it, the cow was a quarter-mile behind barbed wire and is only about 12' tall and nowhere near worth the sixty mile trip from home. Oh well, we did have a lot of fun on the way and figured we'd hit our next stop: the grave of Elise the Cow.

Elise the Cow was featured in many old movies back in 'the day' and became a legend all around the US, and brought fame to Central Jersey. However, we couldn't find her grave site and basically drove around for an hour down there for no real reason other then to get really dirty when we tried to walk into the local cemetary. However, the scenery was nice and it was a pretty good trip to welcome spring back and get back into exploring the abandoned, haunted, and the bizarre. 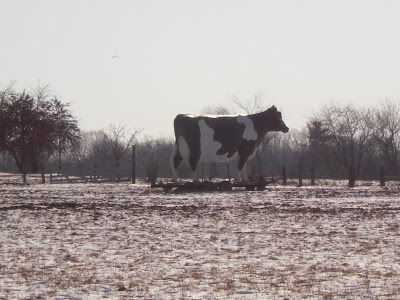 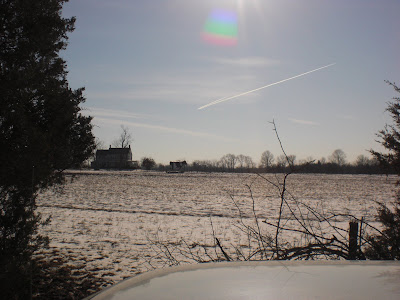 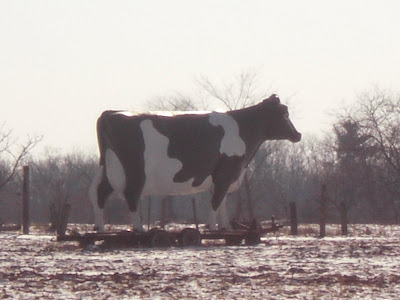